The last two decades have witnessed substantial progress in the measurement of productivity.  However, our understanding of the deep determinants of productivity growth is still limited. This is important in the face of both the global productivity slowdown that emerged since mid-2000s and the large productivity growth divide in Continental Europe between the North and the South, as documented in Figure 1. 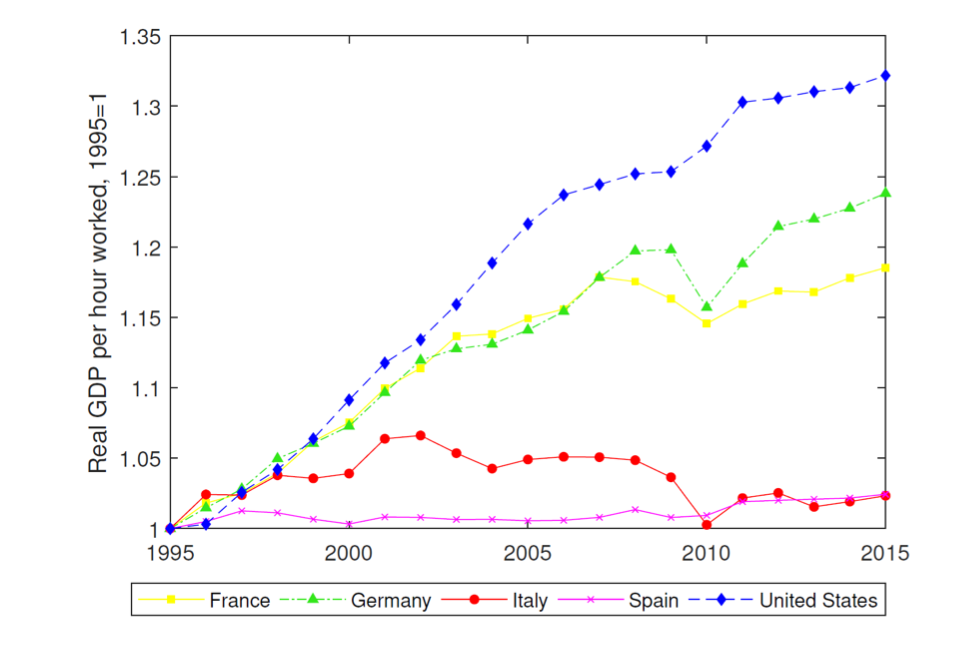 One widely held view is that  Southern Europe lags behind because of lack of structural reforms. This views is hardly supported by the evidence. Figure 2 shows the OECD indicator of product market regulation (a similar picture emerges with other indicators, such as labor and financial markets). First, product markets have been deregulated in all countries. Second, the process has been strongest in Italy, the country with the lowest productivity growth. 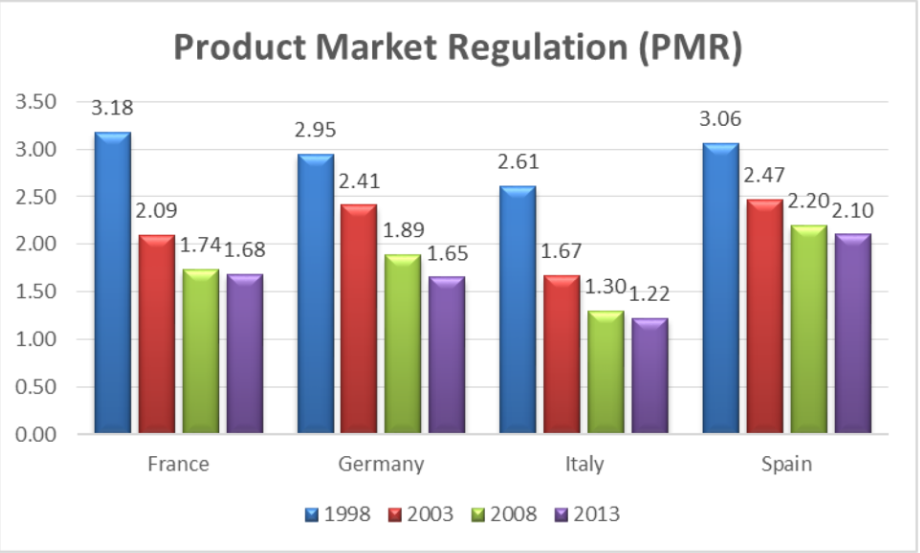 I hypothesize that ownership, control and finance (in short “industrial structure”, IS) play a key role and that their importance, due to technological change, has grown over time. In particular, the project focusses on differences in ownership and controls of firms. I plan to merge insights and state-of-the-art techniques from industrial organization and corporate finance to assess the causes and consequences of different ISs.

Methodologically, I will use a combination of unique data sources (credit register, matched employer-employee data, firm input-output relationships), quasi-experimental design (changes in the banking regulation, executives mortality shocks in local labor markets) as well as structural techniques (selection models and Bayesian learning models)  to address the fundamental identification issues that plague the literature. I also plan a major data collection effort in four European countries to study succession in family firms.
The project will pursue four specific objectives in four deeply integrated work packages: a) The role of firm ownership and control on skill acquisition and risk taking; b) Skills supply: the effects of the education of entrepreneurs and managers; c) Industrial structure, input/output relationships  and IT adoption; d) Access to finance with asymmetric information and imperfectly competitive financial markets.

The ambition is to generate a discontinuous change in our understanding of the relationship between corporate governance/finance and productivity growth. On the way, I expect to contribute to the key debate for the future of the European Union on the diverging productivity performance of European economies.

Professor of Economics and Vice-rector for Research

This interview with Daniele Gallo seeks to examine the relationship between EU law and the Italian legal order in light of the recent Italian Constitutional Court (ICC)’s jurisprudence attempting to redefine EU core principles.