India is currently suffering the second wave of Covid-19. The daily number of new cases is almost 400,000 with nearly 4000 daily deaths reported. Both these numbers could very well be higher due to the limits to how many RT-PCR tests it is feasible to conduct every day, and unreported deaths or of inaccurate reporting of the cause of death.

India made an early national lockdown in the first wave, which was criticized to be too early. It led to a sharp loss in economic activity and an exodus of migrant workers from cities and towns to their homes in villages. India survived the first wave of the pandemic relatively well and perhaps with overconfidence. This was attributed to a young population, or to the policy of the national lockdown. However, the second wave has affected India drastically through a mutation in the virus. 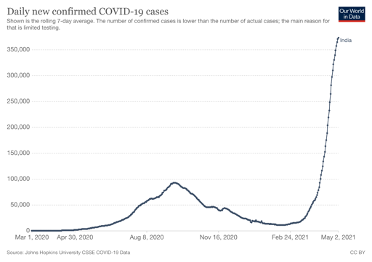 One possible reason attributed for the rapidly increasing numbers seen in the graph above is the B.1.617 variant of the virus that originated in India, which is thought to contain genetic mutations that increase transmissibility. Cases of the mutant virus have also been found in the US and UK several European countries.

The two primary vaccines administered in India are being produced locally. AstraZeneca partnered with Serum institute of India to produce Covishield, which accounts for the bulk of the vaccines administered, while Covaxin was developed indigenously by Bharat Bioshield. Until recently India was the largest exporter of vaccines in the world, supplying 20% of the global production.

India has administered more than 157 million doses by now, which corresponds to 9% of the population, with 29 million receiving both doses. At the current rate, it is estimated to take more than 2.5 years to vaccinate the entire population. While all adults are eligible to access the vaccine since the1st of May, shortages of vaccines have emerged. India has now opened up to imports of vaccines approved by foreign regulators. Negotiations with vendors have started.

The virulence of the new mutant has taken the population and the authorities by surprise. It has spread rapidly and caused thousands of deaths. Vaccine hesitancy and the slow pace of vaccination of the workforce has resulted in high positivity rates. Health facilities are not able to keep up with the large number of Covid-19 cases in many parts of the country, particularly in New Delhi, the national capital. There is a severe shortage of oxygen supply, medicine and hospital beds for Covid-19 patients. Oxygen from mines across the country is arriving in the capital. International assistance has come in from Singapore, Canada, the United States, Russia, Britain, France and Germany through emergency supplies including oxygen concentrators and ventilators. Additional help has also come in from the United Arab Emirates, Taiwan, Bahrain, Romania and Ireland. India now needs to mobilize the movement of the resources coming in towards the people who need it the most.

Events including political rallies and religious congregations have taken place and were criticized as superspreader events. Many states, where cases have risen rapidly have responded to the spread by imposing state level or local lockdowns. There has, however, been no nationwide lockdown this time.

Flattening the curve in the coming weeks through shelter at home policies such as those adopted in Italy in this period last year is the only viable option, as suggested by Dr. Anthony Fauci. In the meantime, vaccination supply and administration can be increased and the pressure on hospital facilities may reduce.

Megha Patnaik is assistent professor at the Department of Economics & Finance, Luiss.

Understanding the sclerosis of the Italian economy: let’s go back to the 5-year period between 1989 and 1994

From state-owned enterprises to privatizations, from the internationalization of companies to the mistakes done by the banks. A contribution by Marcello Messori, Director of the Luiss School of European Political Economy, on the achievements and limits of a season that is still affecting the country

The reason why the “Jamaica coalition” of conservatives, liberals and greens has collapsed in Germany, and why it will now be difficult to replace it. Immigration, the shaky leadership of the parties and the advancement of the extreme come into play. Europe is shaking.

In the identification between single currency and neoliberal policies, that’s where the anti-Euro movement as well the advocates of the status quo are splashing around. Both, armed against one other, pretend not to see that the problem is not the single currency itself, but the intellectual climate that is now prevailing in Europe. Here are some ideas to finally change direction without blowing up the whole continent, taken from Francesco Saraceno’s preface to the Italian edition of Martin Sandbu’s book “Europe’s Orphan”.

Banks as buyers of last resort for government bonds?

According to a widespread belief, banks buying bonds of their own government can have a positive impact on the market, especially in order to stabilize a crisis. Daniel Gros argues, on the contrary, that this is not the case