Conventional wisdom in today’s Western European politics is that left parties, and especially social democratic parties, have been experiencing an unrestrainable electoral decline. Journalists and pundits have highlighted the recent dramatic collapse of social democratic parties in several countries. In France, the Socialist Party fell from 29.4% to 7.4% in the 2017 legislative elections. In Germany, the support for the Social Democratic Party halved in the turn of two decades, from 40.9% in 1998 to 20.5% in 2017, and the party is expected to be replaced by the Greens as the main political force of the centre-left camp in the next elections to be held in September. The Italian centre-left coalition reached a new record-low result in the 2018 parliamentary elections (23.3%). Similar record-low results of social democratic parties occurred in Sweden in 2018 (28.3%), in Switzerland in 2019 (16.8), and especially in the Netherlands, where the Labour party collapsed to 5.7% in the last two parliamentary elections (2017 and 2021). Although in some countries the social democratic fall has been counterbalanced by the rise of radical left parties, like in Greece and Spain (with, respectively, Syriza and Podemos exploiting the decline of PASOK and PSOE), the general picture of the European left is indisputably a gloomy one.

Based on such pieces of evidence, comparative politics scholars are investigating the factors explaining the fall of the Western European left, ranging from social structure’s transformation (i.e., working-class shrinking) to behavioural changes (voters are mobilized according to post-materialist issues cutting across traditional class loyalties), up to left parties’ ideological moderation and convergence towards the mainstream right (i.e., a decreased emphasis on traditional economic left goals alienate the support of the traditional working-class base).

However, a smoking gun has yet to be found. According to the classical cleavage theory by Lipset and Rokkan [1], left electoral mobilization is a function of class cleavage strength. The latter can be empirically measured by looking at two main elements, social group strength and organizational density. The former refers to the characteristics of its core social constituency, namely the working class. The more sizeable and industry-based the working-class, the larger the expected support for the left. The latter instead refers to the corporate and partisan components of the cleavage, namely trade unions and left party organizations. The denser the organizational encapsulation within trade unions and left political parties, the larger the electoral support for the left.

Starting from these premises, in a new article on Perspectives on Politics [2], I investigate whether left parties are still linked to their historical class cleavage roots or, instead, whether the electoral support for the former is completely detached from the socio-structural and organizational features from which such parties originally stemmed.

The link between class cleavage roots and left electoral mobilization is tested through a comparative longitudinal research design that takes into account 19 Western European countries and their parliamentary elections in the whole post-World War II period (345 elections) so as to offer a comprehensive perspective that goes beyond the mere assessment of the last few years and allows for an accurate analysis of long-term changes.

The analysis shows that the support for left parties – communist, socialist, social-democratic, and labour parties – has remained quite stable from 1946 to 2010, with an average of 38% and a peak of 40.4% in the 1970s. Notably, the last decade is characterized by a remarkable decline: the aggregate vote share of left parties decreases to an average of 31.9% in the 2010s, and such decline is even more pronounced if one excludes southern European countries (27.6%). Moreover, contrary to many claims about the recent alleged right-wing shift of left parties, an empirical test based on Comparative Manifesto Project data from 1945 and 2018 unequivocally rejects the hypothesis that left parties have shifted ideologically away from traditional economic left goals. Conversely, the analysis shows that left parties can still be safely considered as the legitimate representatives of the working-class side of the class cleavage. 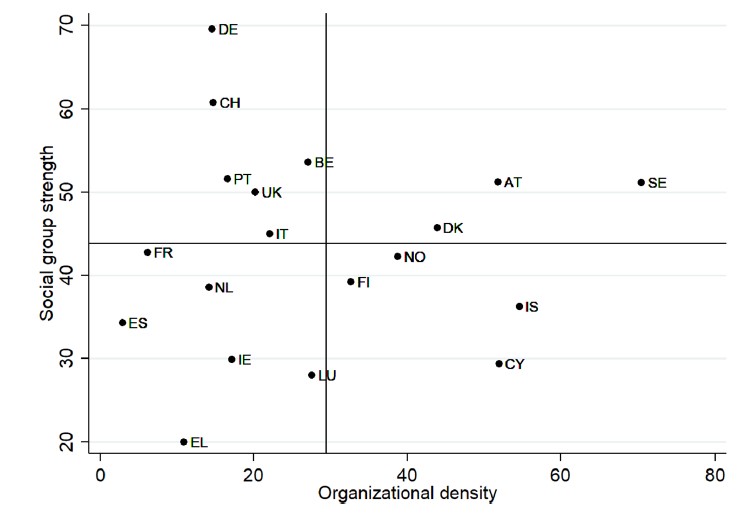 Moving to focal predictors, Figure 1 shows that the class cleavage may assume different configurations in Western European countries. Not surprisingly, Scandinavian countries like Sweden and Denmark, as well as Austria, show the strongest class cleavage, while Greece and Ireland fall at the bottom of the rank. However, the two aspects may not converge, and the development of dense organizational networks (i.e., strong trade unions and left parties) is not necessarily linked to the presence of a sizeable and industry-based working class. This is the case of Cyprus and Iceland, displaying relatively strong organizations in a context of a small and heterogeneous working class, but also of Germany and Switzerland, where the opposite situation of a strong social group goes hand in hand with a comparatively weak organizational density. At any rate, by looking at the evolution over time of class cleavage roots reported in Figure 2, a general picture of decline emerges: the working class has shrunk in size and has become less industry-based, while trade unions and left political parties have lost members. This picture is fairly consistent across countries. 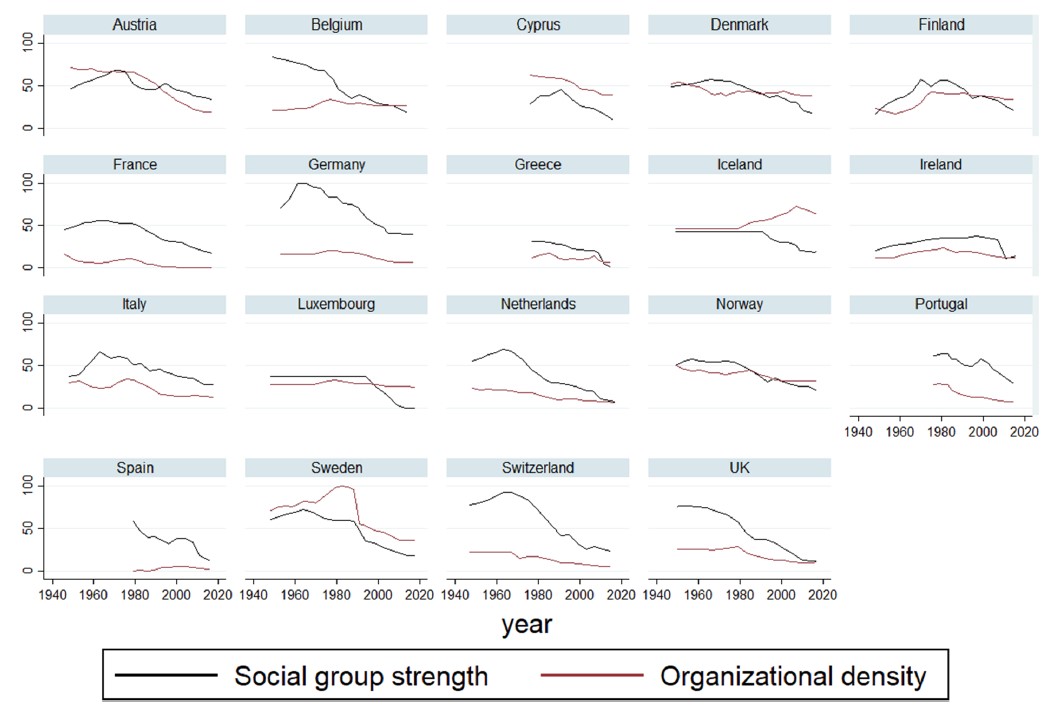 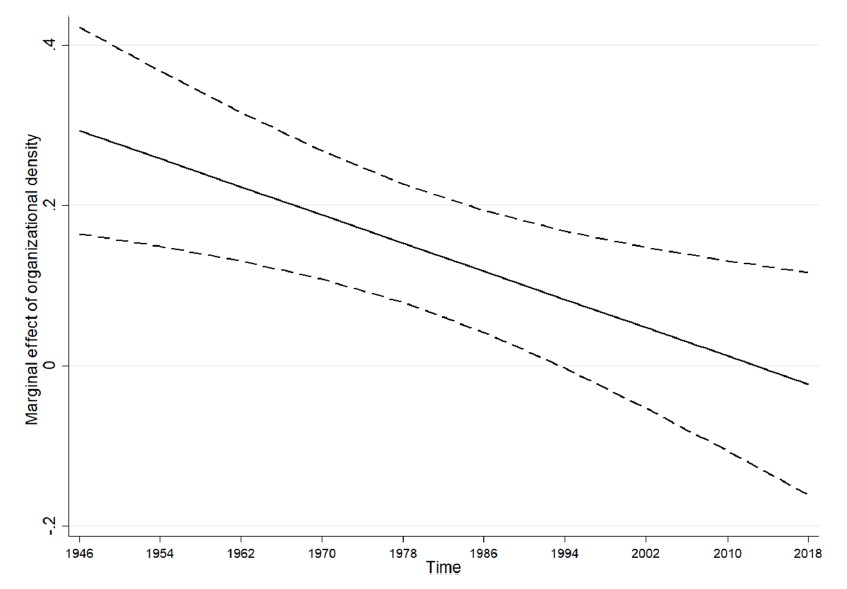 In a nutshell, the analysis tells us that the class cleavage is not entirely ‘lost in translation’, as a sizeable and industry-based working class is still today an important predictor of left electoral mobilization. Nevertheless, such mobilization is no longer mediated by the corporate and partisan organizations, the original vectors of cleavage translation. Indeed, membership in trade unions and left-wing parties are no longer associated with left electoral support. These results deserve careful future consideration and have important implications for the study of cleavages and elections. In particular, they raise fundamental questions about the future of left parties and their class cleavage roots. Will the persistent link between class cleavage’s socio-structural roots and left electoral mobilization be a sufficient factor for class bloc parties’ electoral resilience, despite the missing link with class cleavage’s organizational roots? Or, instead, will the breakage of the transmission belt between organizational density and left electoral mobilization cause an electoral disintegration of these parties in the near future? Further research should carefully address these questions, whose answer is paramount for our understanding of class politics and electoral competition in twenty-first-century Europe.